At the end of the school year, Nancy Spencer will step away from Riverside, having changed the five-decade old institution forever for the better. Her most recent roles have entailed working as an Orton-Gillingham Fellow, training and supervising Language Fundamentals (LF) teachers.

If that sounds important and non-ceremonial, even to a lay person’s sight and ears, you’re right.

Her impact since arriving at Riverside in 1995 is nearly impossible to measure, but her greatest legacy may be best reflected in both the teachers she has mentored and the students’ lives she has transformed, the majority of whom have dealt with dyslexia and other language-based learning differences.

Prior to coming to Riverside, Mrs. Spencer had a few touchpoints with students’ dealing with learning disabilities while teaching Title I reading in a public school setting. In that environment, she knew that she wanted to impact the lives of children. But how?

Riverside arrived on her career timeline in the mid-1990s when she was hired as an LF tutor and was tasked with using the Orton-Gillingham (O-G) Approach to help children overcome dyslexia.

“When I came here, there was no formal training. I had to figure out a lot of things for myself.” Mrs. Spencer says. Largely, thanks to Riverside Fellow Carolyn Webb and Mrs. Spencer’s influence, every new LF tutor has a mentor these days. “That first year, there were lots of things I did wrong, but I persevered and finally started seeing the patterns and strategies for teaching with the O-G Approach.” 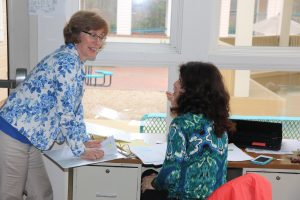 As it turns out, the O-G Approach became so ingrained in her teaching philosophy that within a few years of her start date, she’d been asked to pursue becoming an O-G Fellow, the highest of the three levels of certification from the Academy of Orton-Gillingham Practitioners and Educators (AOGPE). B

eing a Fellow qualifies an individual to teach the O-G Approach to other adults.

“It was not on my ‘bucket list’ of things that I wanted to do, but I thought, ‘Well, (Riverside) has given me a wonderful opportunity, so let’s take the opportunity and see what comes of it,’ ” Mrs. Spencer recalls. “What a blessing it turned out to be!”

But not without its demands. Reaching the Fellow level is an arduous, exhausting process that entails hundreds of hours of training, classwork, reading, writing, curriculum development, presentations, evaluation and more. Truth be told, many teachers don’t pursue the Fellow level, largely because of the grueling path and unrelenting time commitment the pursuit entails.

As Mrs. Spencer learned more about O-G, her craving to help kids with dyslexia intensified. In essence, she was using the O-G Approach to retrain kids’ thought processes to perform language and learning tasks. By 2005, she had reached the finish line to become an AOGPE Fellow, joining past Riverside Fellows Ruth Harris and Mrs. Webb to reach the elite level. Mrs. Webb was Mrs. Spencer’s mentor. Mrs. Spencer did it all while having a plentiful plate of responsibilities at Riverside—no small feat.

Today, Mrs. Spencer admits that one of her great takeaways from her time at Riverside is appreciating that everyone learns in their own, unique way.

“When I started working here, one of the things that became so obvious to me, for the first time in my life really, was that we’re all programmed so much by how our brains function and everyone’s brain functions differently,” she says. “Whether you’re a student or an adult—it doesn’t make any difference. Just because someone does something differently than how you would do it doesn’t mean it’s wrong. It just means that their brain processes something differently than your brain.”

Mrs. Spencer says one of the things she has enjoyed most about Riverside is how it can transform students.

“One example is a student who arrived at Riverside with some emotional baggage after experiencing frustration at his previous school. Tears were a common occurrence,” she remembers. “In his second year, during a potential parent visit, he was asked to tell the parents what he thought about Riverside. He stood up, put his hands in his pockets and had a swagger of confidence about him. He started talking about how much Riverside had helped him. To see a child go from frequent tears, to one year later having such confidence in himself and in what he was doing, brought tears to my eyes.”

Unlike her early years at Riverside when she didn’t have many colleagues to lean on, Mrs. Spencer is a mentor, an invaluable resource to LF instructors and others learning the O-G Approach or seeking formal certification from AOGPE. Mrs. Spencer oversees and offers feedback to ensure the O-G Approach is being taught correctly and procedures are being implemented. Countless teachers and students at Riverside and beyond have culled from her knowledge base.

“Nancy’s expertise with the Orton-Gillingham Approach is recognized nationally, and she has had a hand in shaping every aspect of our Language Fundamentals curriculum,” says Hal Waller, Riverside’s Head of School.

When a new teacher is hired, Mrs. Spencer and Cynthia Davis, an AOGPE Fellow-in-Training, ensure that their lesson plans and methodology are consistent with the O-G Approach.

“We meet with new teachers daily to discuss things like, ‘How did the lesson go? ‘What do we need to do tomorrow?’ ” Mrs. Spencer explains. “During the first two years, new teachers get a lot of one-on-one support. It’s so crucial to establish correct practices when they’re learning to teach the O-G way.

“I came here with a strong teaching background and I still had a huge learning curve to learn how to teach O-G with integrity. This is why intensive work during those first two years when habits are being established is so vital. Teaching with the O-G Approach is a true commitment as it can easily take an hour to prepare a 45-minute lesson.”

Riverside prides itself on tailored instruction that translates not only from teacher-to-student, but teacher-to-teacher. Her greatest give-back to Riverside may be that’s she’s helped to facilitate the success and empowerment of countless colleagues and students. 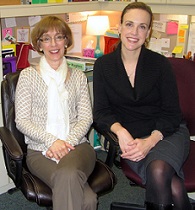 “Nancy has been quietly training LF teachers on how to use the O-G approach for more years than most of us know,” Mrs. Davis says (she is pictured right with Mrs. Spencer). “She has set the standard bar high for LF lessons and for the knowledge of the structure of language, but Nancy holds us up, supports us and helps us reach that bar.

“As teachers, we know this about our students: ‘They don’t care how much you know until they know how much you care.’ LF trainees are keenly aware of how much Nancy cares, and we are also thankful for how much she knows. Through many years of change, she has remained relentlessly positive, always willing to do what was needed, and a friend to all of us. Our school is a great place because of Nancy Spencer, and for that, we are forever grateful.”

Now well into her fourth decade of education-based work, Mrs. Spencer has decided that it’s time to come up for air, be a little less bound by the heavy work load she annually carries, reserve some overdue ‘me’ moments and spend more time with her family, including her husband of 35 years.

“It’s time for us to have some time to play together,” Mrs. Spencer says.