He has logged 24 hours and 21 minutes of spacewalk time and four spacewalks.

Riverside School’s mission is to provide remediation of language skills for students with dyslexia and similar language-based learning differences in grades K-8, so that they can return to mainstream education fully prepared to realize their highest potential. 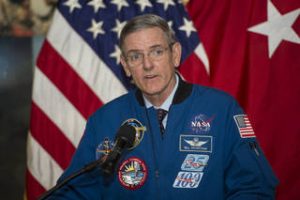 “It is a real treat and a great honor for our school and students to be able to welcome Col. McArthur. At Riverside, we know that if a student can believe in the power of their dreams, they are bound by only their imagination. As Col. McArthur has shown throughout his life and career, the energy of aspiration can take you anywhere,” said Hal Waller, Riverside’s Head of School. “We are all looking forward to engaging experience with Col. McArthur in advancing our students’ learning and creative skills.”

During a six-month tour of duty as commander and International Space Station (ISS) science officer of the Expedition 12, Col. McArthur conducted two more spacewalks, including the only spacewalk ever conducted in NASA’s Extravehicular Mobility Unit without the aid of additional crew members inside the spacecraft.

Many otherworldly highlights include performing four spacewalks on the STS-92 Discovery; completing a mission aboard the STS-7882 Atlantis where he helped deliver a permanent docking module, making future space shuttle dockings safer—and making extensive contact with school children and around the world through the Amateur Radio experiment as a part of the crew on the STS-58 Columbia.

Col. McArthur began his career in the U.S. Army in 1973. He was assigned to NASA’s Johnson Space Center in 1987, after graduating from the U.S. Naval Test Pilot School and being designated an experimental test pilot. He spent three years as a space shuttle vehicle integration test engineer, testing the flight control system for each orbiter before being selected as an astronaut.

He is married to the former Cynthia Kathryn Lovin of Red Springs, N.C. They have two daughters and four grandchildren.