Riverside joins in extending congratulations on the debut of school’s Robotics Club, which competed in the First Lego League tournament this past Saturday, Nov. 23 at Deep Run High School in Glen Allen. Riverside is a school for students with dyslexia in grades K-8.

A group of dedicated Riverside students in grades 5-8, as well as a contingent of adult advisers, gave more than two months of their time and talents after school from early September to mid-November to prepare for the event. 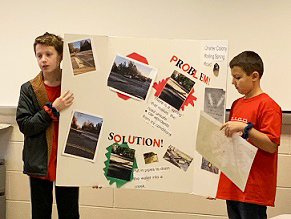 n the process, the contingent of seven students constructed a robot and other mechanical devices from scratch via a Lego kit to perform various tasks on and around a ‘mock city.’ Ultimately, the newly-formed group presented solutions to various scenarios such as programming the robot to carry Legos and other objects to specific locations on a city / municipal map.

Moreover, students learned how to solve real-world problems by thinking through tough challenges, learning from and with fellow students and trying out new ways and ideas. In addition to grasping new concepts about engineering, the club also enhanced participants’ teamwork and problem-solving skills that will serve them well in the near- and long-term.

“They had to learn to identify a problem and know enough about the problem to think of a potential solution and had to research to figure out if their thinking was reasonable,” said Riverside teacher Mrs. Bushhouse, faculty adviser to the Robotics Club. “The core principles were teamwork, talking to each other, coming to a consensus and listening to other people’s ideas, which is not always easy.”

Riverside’s Robotics Club complements the school’s practice of teaching to the point so students can ultimately master an idea or concept. In many ways, the same held true regarding the logistics of constructing the robot; one false move by the device meant regrouping, fixing and reprogramming it, among other corrective measures, which aided students’ sense and logic. Students learned quickly from their mistakes leading up to the Lego League event.

“For our population, they learned how to take risks, because if you’re not willing to take a risk, you’re not going to grow,” said Mrs. Bushhouse. “And when things go wrong, how to get back on track.”

At the tournament, which features competition against other schools, all came away impressed with Riverside’s robot—and most importantly, our students’ enthusiasm and ‘can-do’ attitude during the school’s first appearance. Riverside placed sixth out of eight teams in the ‘robot missions’ portion. The adults advisers were especially impressed with the team’s performance in the ‘core values’ session.

All told, the event was more about building upon each child’s potential.

“I learned a lot about teamwork. I learned to let everyone else have a turn. I learned to be patient, have fun and not quit,” said Lillie, a Robotics Club member.

Thank you to all of the students who took part in the inaugural club—Abe, Ethan, Jacob, Lillie, Loudoun, Mason and Stephen. The school also extends heartfelt gratitide to Mrs. Bushhouse, for her leadership in guiding and facilitating their progress, as well as to Associate Head of School Debra Mitchell, Director of Development Leo Rohr and Riverside parent Charles Arthur for providing timely help, instruction and lessons along the way.