On the morning of April 4, the husband of Riverside Language Fundamentals instructor Jenn Walker decided to go to the grocery store.

Brian Walker had basically everything he needed for the Saturday chore, except for one important item.

“I thought he needed to have a mask on,” Mrs. Walker remembers.

So she grabbed some clean fabric and managed to get her hands on sturdy pieces of flannel and elastic. She hustled to fashion a makeshift covering for her husband at their Richmond residence. Though the process of cutting the cloth square to just the right size and attaching an elastic band to it was a bit rudimentary, the impact wasn’t. She might’ve saved his life—or someone else’s. That’s the harsh reality of the coronavirus / COVID-19 world we live in today; anyone can be infected at any time, knowingly or unknowingly. 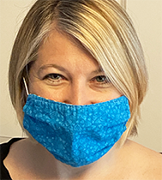 Two days before Mrs. Walker cobbled together the mask, more than one million people around the world had been diagnosed with COVID-19. Today, more than 96,000 people in the U.S. have died from the pandemic.

In addition to family, she’s generously given the protective gear to friends such as her hairstylist, who doesn’t have a choice but to be in close contact with others. Two layers of the masks Mrs. Walker produces are formed of tightly-woven cotton. There’s also a flannel interior. The masks she’s made can be reused after being washed; Brian, for instance, has worn the same mask multiple times after running it through the washing machine.

“Make sure a sneeze doesn’t get out there,” says Mrs. Walker.

Though Mrs. Walker admits that she is hardly a seamstress, her selfless efforts make her one of the unsung heroes of the COVID-19 crisis. The fabric has been collected over the years as a part of various projects that have unfolded during her life. At one point, Mrs. Walker had a bin full of fabrics. There has been the trial and error of producing pouches, constructing and designing décor such as curtains as well as repairing clothing.

The elastic straps mostly come from scrunchies, a material that someone—females, in particular—would use to help tie a ponytail. Her daughter, a student at The Steward School in Richmond, made 27 scrunchies for a mini-economy assignment in connection with a class. Mrs. Walker has used some leftover elastic from her daughter’s project.

Today, it’s routine to see individuals out in public covering their nose and mouth, making Mrs. Walker’s mask-making all the more important and admirable. And she practices what she has, well … sewn.

“I feel like I am doing the right thing by wearing a mask and protecting others around me,” says Mrs. Walker, who is not making coverings at the moment partly because demand for fabric has far exceeded supply. Now in her fourth year as an LF instructor at Riverside, she’s also laser-focused on facilitating student growth during these incredibly trying times.

A sense of determination has been Mrs. Walker’s fiercest ally both in making masks and having to teach kids in an online, remote learning environment that the coronavirus has forced upon teachers, among others.

Then again, her soul is lined with fortitude. 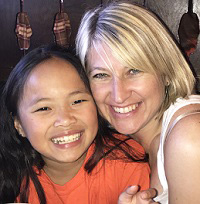 Mrs. Walker tapped in to her seemingly endless supply of energy when she and her husband adopted Hana. They navigated red tape, completed scads of paperwork and forms, endured time delays and went back and forth multiple times with the U.S. State Department, overall facing a sometimes maddening maze in the adoption process. Mrs. Walker notes that the paperwork that she and her husband had to complete, when finished, measured an inch tall.

Truth is, the aforementioned trials are just a small snapshot of what the Walkers went through during the almost cruel uncertainty of waiting in hopes of adopting a child.

But on Aug. 9, 2009, they went to Hana’s province in southern China called Guangdong, and adopted the six-month-old a day later. Officially acquiring the child is known as ‘Gotcha Day’ because the family takes possession of the one they adopt.

Connect the dots and the almost dizzying process it took to legally call Hana their daughter, start to finish, lasted four years—not exactly for the faint of heart. What a day ‘Gotcha Day’ was, though. They took turns holding little Hana in their arms, with laughter and tears mixed in. Thirty-six hours after waking up in Guangzhou, China, the Walker family was home in Richmond. All of their fears had been doused.

“It was a very emotional time,” Mrs. Walker says, “but it was well worth it to get her.”

Today, her love of family, dedication to helping others and quest to aid children in overcoming dyslexia, which is at the heart of Riverside’s mission, is unrelenting. Wiping out the coronavirus is a day-by-day battle and Mrs. Walker is the possessor of a trait that can’t be taught—a courageous desire to derail the momentum of the dangerous disease in hopes of ensuring a better future for humankind.

Author Andrew Blair is communications and marketing coordinator at Riverside School.
E-mail him at: ablair@riversideschool.org.