‘I Learned to be a Good Sport:’ Riverside’s Robotics Club Teaches More Than Mechanics

Riverside’s Robotics Club recently wrapped up its second season, with nine dedicated students giving of their time and talents as part of the afterschool activity over a three-month span.

Down to its nuts and bolts, the project entailed three groups of Intermediate School / Ticer Hall students working together to build a robot and attachments from a LEGO® MINDSTORMS® Kit. One of the primary goals was to program the EV3 intelligent ‘brick’ robots to traverse and perform various missions on and around the themed challenge field. This year’s challenge was RePLAY where everyone is an athlete. 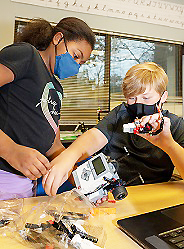 There were days of can’t-miss excitement and other times when students body-language read: ‘Is this ever going to work?’ In the end, that dynamic wasn’t such a bad thing. The robots turned backward, forward, sideways—even 360 degrees. They collided with boundaries—but also turned corners with all of the precision of an Indy car. They knocked down and pushed items on command, and occasionally dropped pieces with all the grace of a dump truck.

Despite trial-and-error, Riversiders built the robots piece-by-piece and were focused on the process of completing their respective missions. The participants were given the option of selecting the difficulty of their mission.

“Groups could choose,” says. Mrs. Bushhouse, the Riverside faculty coordinator of the Robotics Club. Riverside Director of Development Leo Rohr was the assistant coach. “Some of the missions were easier to achieve, while others were more challenging,”

Teams earned points based on the mission’s level of difficulty, the precision of the maneuvers and the execution of their mission. Undeniably, students learned about the mechanics of building a robot, and gained exposure to concepts of engineering, science, math and physics using new software and motors. Students wrote programs on their laptops and then uploaded them through USB connections to make the robots move.

The engineering phase aside, they came away with life lessons such as the value of teamwork, respect for others, perseverance, as well as listening to ideas different from their own—and adopting those suggestions. The messages that got driven home varied during the club’s duration, which lasted from November through early February when the club concluded with a public showing of their work in the Riverside gymnatorium.

All told, a positive atmosphere and healthy environment pervaded the club. In addition to seeing challenges to the end, all involved had to obey rules of Covid-19 that included social distancing and mask-wearing.

“I am so proud of the Lego Robotics Club members this year,” Mr. Rohr says. “They fully embraced the First Lego League’s core values of Discovery, Inclusion, Teamwork, Innovation, Impact and Fun. This was evident in their work to build their robots and program the various missions, culminating in an impressive showcase competition at the season’s end.”

Mrs. Bushhouse pointed out that students developed important traits, including one in particular. 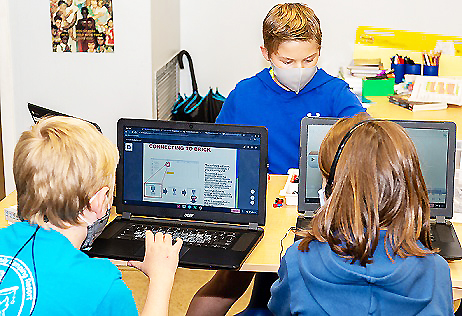 “Compromise,” Mrs. Bushhouse says when asked about some of the take-home life lessons from the sessions. “You know, ‘I want to do it this way. I want to do it that way.’ It was, ‘Let’s see if we can’t problem-solve together.’ ”

One team took that concept to the hilt, empowering their robot to flatten a bench and reposition it on the table, as well as taking a step counter and pushing it all the way forward. Another group gave its robot orders for to make a sharp curve and travel under a bridge. With students delving into their imagination, each group programmed their robot to spin in a circle on command in an impressive—jaw-dropping is more like it—manner. The students showed an abundant sense of adventure.

“Another group received maximum points when their robot spun as though it was dancing on a designated ‘dance’ area,” Mrs. Bushhouse says.

Decision-making was also a huge part of each endeavor, according to Mrs. Bushhouse

“There was this sense, ‘Oh, we really want those 25 points,’ so they had to prioritize, evaluate and work together to find a solution,” she says

Robotics Club members such as Logan noted that the activities allowed him to grow in a variety of ways.

“The programs were really cool,” he said. “I learned to be a good sport.”

The endgame would make Jason Lindsey, of ‘Hooked on Science’ fame, proud. Riverside joins in congratulating the participants who took part in Robotics Club during the 2020-21 academic year—Adam, Ava, Elena, Hazel, Jaxson, Logan, Merritt and Neeve.